Mountains, inc. is based in the ski resort of La Plagne, one half of the integrated skiing area of Paradiski. Opened in December 2003, the revolutionary high-speed 200 person cable car the Vanoise Express transports skiers across the valley between La Plagne (Montchavin-Les Coches) and Les Arcs (Peisey Vallandry). Paradiski is one of the largest winter playgrounds in the world, with over 400km of groomed pistes. Visitors can choose to buy a lift pass for just the Montchavin -Les Coches area; for La Plagne; or for Paradiski.

La Plagne is a vast state-of-the-art ski area that covers 220 kilometres of groomed pistes, serviced by 108 lifts. The 132 runs range from the top of the Bellecote glacier at 3417m to the tree lined slopes of the lower villages at 1250m. There are miles of blue and red runs and some good beginners slopes with free drag lifts and gentle gradients; plus some superb and testing black runs, and the off piste is extensive and not tracked out. Guided off piste expeditions can be arranged taking you away from the crowds into the unspoilt Ponturin valley.

Within the La Plagne boundaries are 10 resort villages, all with their own character and importantly their own facilities. Spread across the mountain, they are linked by efficient lift services. Montchavin is a traditional Savoyard village, surrounded by apple orchards and rooted in a farming tradition that predates the skiing industry by several hundred years. The resort has restaurants and bars, a cinema and nightclub, shops and 2 ski schools. Just above is the newer resort village of Les Coches, linked by lifts and a resort bus, with more restaurants and its own ski schools. A gentle slope in the bowl of the village has a free draglift for beginners and a children’s snow park. The lifts whiz you up past pretty tree lined tracks to the open spaces of La Plagne. Snow cannons and the direction of the slopes ensure the lower runs are kept open all season. In misty or snowy conditions the tree lined slopes can offer the best visibility.

If you like to rack up those miles, you can choose to ski Les Arcs as well as La Plagne with the Paradiski lift pass. Previously only accessible from La Plagne by a long road trip, with the new 200 person cable car you can get there from Montchavin in 15 minutes. With 200 km of groomed pistes serviced by 76 lifts you will truly be able to make sure that you never ski the same terrain twice.

For pictures of the resorts click on the images

If this is your first skiing holiday (or just the first in a long while) then relax and let us sort everything out for you. We will book your skiing or snowboarding lessons (choose between private lessons, either by yourself or with friends, or group lessons). When you arrive we’ll come with you to get you kitted out with boots and skis or snowboard; and we’ll take you to your first lesson, where your lift pass will be waiting for you. At the end of the day we’ll collect you and you can relax back at the chalet with like minded people, and tell tall tales of your amazing prowess on the snow. A Checklist and list of essential things to bring can be found in the At A Glance guide; but don’t worry, anything forgotten can be bought in the shops here.

You will be in heaven, with miles of cruisy blues and reds to practice on and even, if you’re feeling brave, lots of gentle off piste to try out tucked between the marked runs. Ask us to book you more lessons to perfect your technique; or set your own agenda. As you can explore practically the whole resort on blue pistes, the only limit is your stamina…

www.pistehors.com: ‘the area features some of the planets most awesome off-piste skiing..’ Warm up with a vertical drop of 2000 metres, before heading off to find some powder. Once you’ve explored the black runs and enjoyed the mogul fields, why not book a guide for the day and have an off-piste adventure in the beautiful and unspoilt Ponturin Valley, coming home by the Vanoise Express? Or go off heliskiing, ice climbing, or ski touring….. Talk to us about what you want to do and we will arrange it in advance.
And for your afternoon off…
If you fancy a break from skiing, why not hook up with one of the daily snowshoeing expeditions or winter walks. Or you could visit the ice skating rink, or take off in a hang-glider. Over at Plagne 1800 you can have a go on the Olympic Bobsleigh; or back in the village you can eat, drink, shop and chill out. In the evening, if you can resist the lure of the giant sofas, you can visit the bars or go to the cinema. 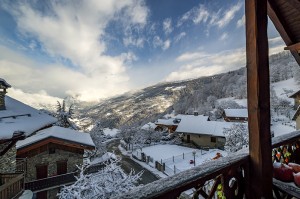 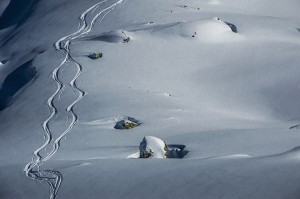